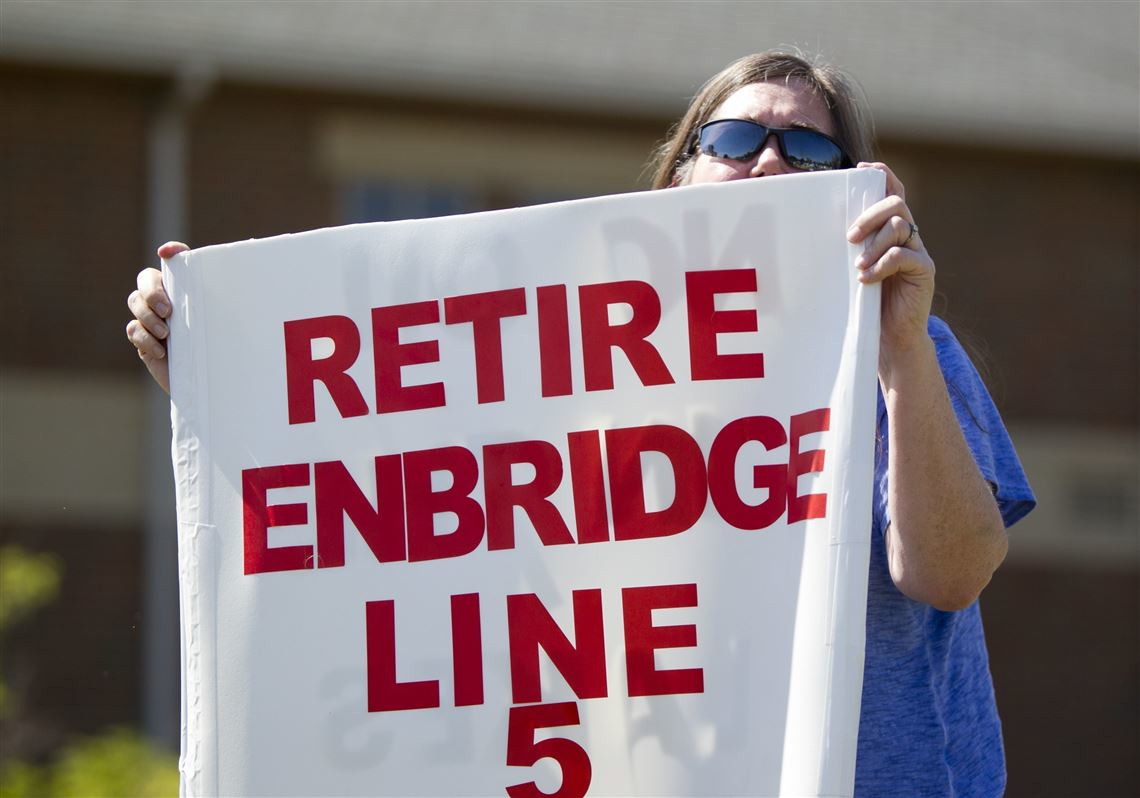 STRAITS OF MACKINAC, Mich. — Thousands of tourists who drive deep into northern Michigan this time of year see dense stands of maple, hemlock, birch, beech, and aspen; trees showing off their dazzling array of fall colors against a backdrop of beautiful evergreens.

The fall foliage symbolizes change in a part of the country where seasons — especially winter — come on hard and fast.

But not far from the forests’ blazing reds, yellows, and oranges, another potent symbol of change lies below the deep blue waters of the Great Lakes.

Calgary-based Enbridge Inc.’s Line 5 pipeline begins in the tar sands of Western Canada and cuts across both of Michigan’s peninsulas before ending in Sarnia, Ont. Line 5 has become both the latest of several high-profile battlegrounds over pipeline safety — and a symbol of decisions being made now that could forever change how and where pipelines are built in America.

Line 5 has one important distinction from the Keystone XL Pipeline and the Dakota Access Pipeline projects that have garnered so much attention in recent years: It runs across the Straits of Mackinac, the dividing line between Lake Michigan and Lake Huron. For 65 years, Line 5 has sat atop the 4.5-mile lakebed of Lake Michigan.

VIDEO: Four of the people camping out in protest of Line 5

Early this month, Enbridge reached a closed-door agreement with Michigan Gov. Rick Snyder to build a new pipeline and submerge it 100 feet below the lakebed, encapsulated by a modern tunnel large enough for inspectors to drive vehicles through.

“Our focus is on the agreement now. We’re excited about it,” Enbridge spokesman Ryan Duffy said.

The project appears to be the first of its kind in America, industry experts said.

Some people believe successfully completing the project could uncap the potential for economic growth in areas where ecological concerns have historically outweighed risks associated with pipelines. But Terry Lodge, a Toledo area resident challenging pipeline projects in Ohio, disputes that only because he already sees too many crossings beneath waterways, including the Maumee River.

Lakebed pipeline crossings are already the norm, and almost every major river and dozens of creeks in northern Ohio have pipelines beneath them, some in earthquake-prone areas, he said.

“So the question is not whether a new Line 5 project will spawn other ridiculous gambles; the new Line 5 is simply another gamble being trivialized and marketed as technologically routine,” Mr. Lodge said.

Robin Rorick, vice president of midstream operations at the Washington-based American Petroleum Institute, said America’s 500,000-mile pipeline network is important for national security, and that Line 5 is an important part of it.

“As an industry, we feel that a robust network of pipelines in this country is absolutely essential,” Mr. Rorick said.

Michigan Laborers-Employers Cooperation & Education Trust has been involved in building multiple energy projects across Michigan, including pipeline projects. It even had a role with the Line 5 pipeline that was completed in 1953. The plan outlined in the new agreement is “absolutely” doable, spokesman Chris Hennessy said.

“The technology exists to make it happen,” Mr. Hennessy said. “It seems like a very logical solution.”

The cost estimate is $350 million to $500 million. Cost-shares with various utilities are likely to be negotiated, and no tax dollars are to be used. The project is expected to take seven to 10 years.

During that time the existing Line 5 will remain vulnerable to the sort of incident that occurred in April, when an anchor dented the pipeline, requiring an underwater repair and underscoring the aging infrastructure’s vulnerability.

“The anchor dented the outside of the line, but didn’t do damage to the metal itself. It didn’t affect the integrity of metal,” Mr. Duffy said. “We repaired the metal.”

No oil release occurred, but the stakes remain high nonetheless.

The Great Lakes hold 20 percent of the world’s fresh surface water. They facilitate ecotourism and shipping, and are the primary source of drinking water for 30 million Americans — including hundreds of thousands in the Toledo area — and 10 million Canadians.

Toledo is located some 350 miles from the straits, but because Great Lakes currents generally move west-to-east, water from both Lake Michigan and Lake Huron would eventually make its way down to western Lake Erie.

With so much at stake, many agree a catastrophic failure of Line 5 could bring to a halt future pipeline projects — or, conversely, jump-start them if the proposed tunnel project proves to be as successful as Enbridge expects.

Along a nondescript dirt road off U.S. 31, 17 miles south of the Mackinac Bridge in Emmet County’s McKinley Township, there’s far more than the splashy, vibrant colors of changing leaves captivating attention this fall.

There’s the heartbeat of a national resistance movement to pipelines. It’s felt at an encampment that began there two months ago by about a dozen fiercely determined freshwater crusaders. Many have tales of tear gas and other dispersion techniques used against protesters at the Standing Rock Indian Reservation in South Dakota, when they opposed the 1,172-mile, $3.8 billion Dakota Access Pipeline, which was finished in 2017.

Nearly all protesters, including Amos Cloud, a Potawatomi from Mount Pleasant, Mich., remain angered by the sluggishness of Enbridge’s response to the July 26, 2010 Kalamazoo River oil spill, one of the largest inland oil spills in U.S. history.

The National Transportation Safety Board has cited Enbridge for delays in identifying the Kalamazoo River oil spill and for losing critical minutes for response. The spill came from a rupture along Enbridge’s 6B pipeline in Talmadge Creek, a Kalamazoo River tributary near Marshall, Mich.

Joe Haas, Michigan Department of Environmental Quality Line 5 project manager, said Enbridge “made mistakes with the Kalamazoo River and will admit that, but is doing better now.”

Jason Geer, the Michigan Chamber of Commerce’s energy and environmental policy director and someone who’s supportive of Enbridge’s agreement to build a tunnel, said there’s no question the company’s handling of the Kalamazoo River oil spill is behind the Line 5 controversy.

Still, images of oil-soaked birds and other wildlife haunt people. Mr. Cloud said he can never forget the way one particular deer along the Kalamazoo River shoreline looked so obviously sick, disoriented, and clumsy.

“It’s heartbreaking when you really think about it,” he said.

Nancy Gallardo, a Grand Rapids, Mich. woman who’s staying at the encampment, is unimpressed by Enbridge’s deal with Governor Snyder. She said her immediate concern is what happens while planning for a new pipeline and construction of the tunnel to occur over the next decade.

“Certainly, this tunnel is another one of their fantasies. We know that putting anything under the Great Lakes is problematic,” Ms. Gallardo said.

On Oct. 9, a natural gas pipeline owned and operated by Enbridge exploded near the British Columbia town of Prince George, resulting in what Enbridge describes in news releases as a precautionary evacuation of 100 people in the Lheidli T’enneh First Nation.

No deaths or injuries have been reported. But that incident has created more anxiety in Ohio among activists such as Leatra Harper, managing director of the FreshWater Accountability Project in Grand Rapids, Ohio.

“It is so amazing to me that so few people have been injured or killed by all the pipeline explosions,” Ms. Harper said.

Mr. Cloud is among several people living at Camp Anishinaabek who are being taught how to deploy oil booms in case the Coast Guard and other agencies ever need help near Line 5.

“Standing Rock was only the beginning, that was the spark to the fire,” Mr. Cloud said. “What they told us to do there was to take the embers of the fire home and start your own fire, because everybody’s going to have an issue back home. Everybody knows water is life.” 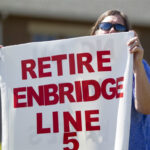 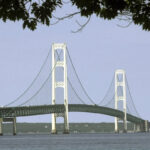 The Mackinac Bridge that spans the Straits of Mackinaw City, Mich. – ASSOCIATED PRESS 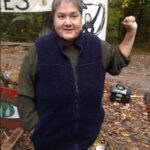 Nancy Gallardo, of Grand Rapids, Mich., a woman of Mexican descent who stands in solidarity with Native Americans who oppose Line 5. She protested with them at Standing Rock and is now doing the same at Line 5 by living for months at the nearby encampment. – THE BLADE-TOM HENRY 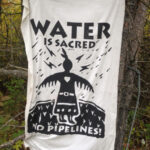 A sign at encampment near Pellston, Mich., where protesters are camping in opposition to the Line 5 pipeline project – THE BLADE-TOM HENRY 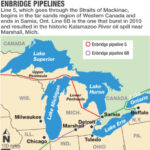 Enbirdge Pipelines, Line 5, which goes through the Straits of Mackinac begings in the tar sands region of Western Canada and ends in Sarnia, Ont. Line 6B is the one that burst in 2010 and resulted in the historic Kalamazoo River spill near Marshall, Mich. 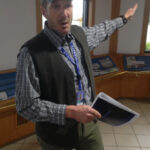 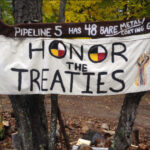 A sign at the encampment near Pellston, Mich. – THE BLADE-TOM HENRY

Amos Cloud, of Mount Pleasant, Mich., a Potawatomi who protested at Standing Rock and is doing the same at Line 5 in Michigan. – THE BLADE-TOM HENRY 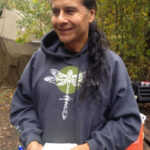 Nathan Wright, of Petoskey, a Citizen of The Sault Ste. Marie Tribe of Chippewa Indians – THE BLADE-TOM HENRY 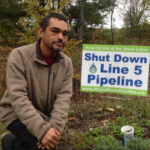 Patrick Deverney, of the Grand Traverse Band of Ottawa and Chippewa, with sign at the encampment near Pellston, Mich. – THE BLADE-TOM HENRY

Contact Tom Henry at thenry@theblade.com, 419-724-6079, or via Twitter @ecowriterohio.
Reprinted with permission of The Toledo Blade © 2018 Toledo Blade Co. All rights reserved. +

One thought on “NORTHERN MICHIGAN SCENE OF LATEST FIGHT OVER PIPELINE”
Click here to cancel reply.

Thank you for helping us make the Mother Earth a cleaner and better place to live.